The merry Jews of Nascar Somebody with a sharp wit and way too much time on his hands created JewsWhoLikeNascar.com. Go ahead, click on it. You'll laugh.

Yes, Nascar was born in the Bible Belt South. And racing and religion are inseparable. Each weekly driver's meeting ends with a prayer and every pre-race ceremony includes an invocation.

Goyishe sport, right? Oy! Would you believe there are enough Jews in Nascar to fill an Adam Sandler song? And then some.

No, they're not the ones driving the racecars, so you're not going to read about them. But here's the thing: You probably will read them. That's because we're all in the press box and media center. It's one of the oddities of Nascar: Many of the people who cover the sport happen to be Jewish.

Nascar fans have probably seen the byline of Jeff Gluck, one of the lead motorsports writers for USA Today and formerly with SBNation.com and the old Nascar Scene. The indefatigable Nascar reporter for The Sporting News is Bob Pockrass. The Associated Press national motorsports writer is Jenna Fryer. Lewis Franck writes for Autoweek and has contributed to ESPN The Magazine, Sports Illustrated's SI.com and Reuters. 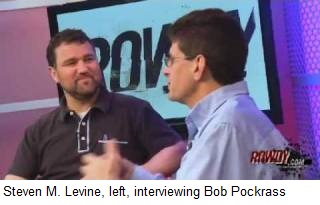 Do you get your Nascar fix from Speed.com (soon to be merged with Foxsports.com)? The editor in chief is the veteran Tom Jensen. The Kansas City Star racing writer is Randy Covitz. Steve Goldberg is a motorsports contributor to Time. The Nascar Illustrated executive producer for new and social media is Steven M. Levine, who hosted the old Rowdy.com racing show. The Performance Racing Network pit reporter is Steve Richards, whose last name is Leibowitz. Eli Gold does radio for Motor Racing Network. Robert Edelstein is the TV Guide contributing editor for Nascar and author of the books Nascar Legends: Memorable Men, Moments and Machines in Racing History; Full Throttle: The Life and Fast Times of Nascar Legend Curtis Turner; and Nascar Generations.

Oh, yeah. If you happened to read about Nascar in The New York Times, there's a chance the story was written by me.

It was Harris, Franck and Goldberg who came up with the (mostly) facetious Jewish Motorsports Press Association years ago. They even printed up membership cards.

"It featured a racecar with a Star of David on the side, a kosher symbol and was sponsored by Hebrew National,'' Goldberg wrote. "I think our motto was, 'Oy, such a fast car!' '' 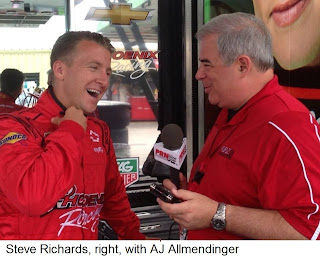 From there, the handful became a pack. Or Tribe.

"Years ago at a media tour -- this was 2005, the year I met Gluck -- I was riding up in the Hilton elevator one night with Gluck, Mike Harris and Lewis,'' Edelstein wrote of the annual gathering of media and Nascar race teams. "And Gluck looked at all of us and said, 'I feel like this must be the Nascar elevator minyan.' "

There is no simple explanation for why so many Jewish writers and reporters gravitated to Nascar with its comparatively small media contingent. We all found our own paths at various times.

"I like to tell people I'm just a simple Jewish kid from the Bronx, so of course Nascar is one of my favorite sports,'' said Edelstein, who lives in New Jersey. "Thank goodness I'm not so devout that I have to care whether the moonshine is kosher."

Many of us are based around the Nascar hub of Charlotte, N.C., land of a thousand churches ... and two temples. But hey, at least Jensen was able to find a nice place to celebrate his son's upcoming Bar Mitzvah.

It will be at the Nascar Hall of Fame. Where else?

Aside from the occasional inside joke, our religion is largely a non-issue at the track. The media center is a little bit like the lunchroom in "Mean Girls," so we don't talk all that much in there, anyway.

It's not an issue with Nascar, either. There are Jewish staff dotting the race teams and public relations machine as well. And they're like any other organization: If you write nice things about them, they'll like you. If not, be prepared for some major kvetching!

I doubt folks in the sport even realize how many of us are in the media center these days. If they did, maybe they would think twice about serving pulled pork every weekend.

So now that you know, would it be too much to ask for a little kosher spread to nosh on instead? Hey Charlotte Motor Speedway, how about a bialy and schmeer?